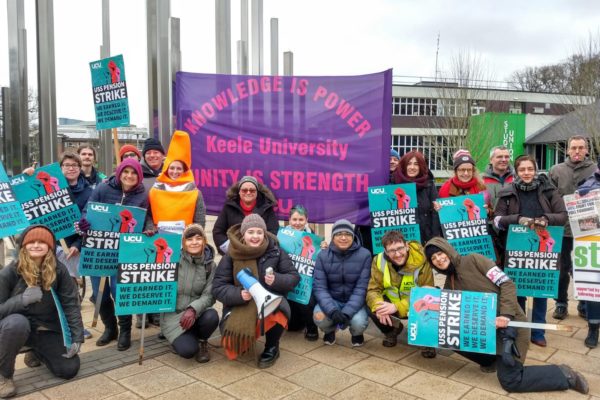 First of all, thanks to all who have stood on the pickets, either at Keele or at other striking universities. Thanks also for maintaining the digital picket – it’s great to see so many members out and in support!

Tuesday we had pancake day on the pickets, and welcomed students who came out to join us.  We also had an impromptu pancake day race in the square, and discovered that picket placards are a pretty decent replacement for frying pans. One of our supporting students was crowned Keele UCU picket pancake race champ!

We’re at the front and back gates Wednesday (last day this week). Since it might be a bit wintery, we’re having beach themed pickets, so bring along anything you think is beach appropriate and join in the fun. We’re out 8-11am, with both gates meeting in the square at 11:15. We’ve had new faces join, which is great, and we’ve seen an increasing number of senior colleagues joining, too. Senior colleagues on the pickets are vital, not only for sending a message to management, but also to junior colleagues. We all sacrifice a lot when on strike, but junior colleagues arguably sacrifice a lot more and they deserve to know, and to see, that more senior colleagues are standing alongside them.

Just a few updates on where we are now.

This weekend a few documents were leaked regarding the USS dispute. One was a letter from UUK to Vice Chancellors, in which it was stated that UUK’s position would be to continue to explore JEP.  The second was the executive summary of the investigative report into Jane Hutton, a UCU USS trustee who was dismissed from her post last year after, apparently, asking too many questions. The executive summary is enlightening reading – As a USS trustee, Jane Hutton, a statistician and an expert on valuations, was refused access to information pertaining to the valuation and was then dismissed. The report gives an overview of the reasons for this, including that in trying to check the numbers, she was being difficult and was acting outside of the scope of her role. This report, commissioned by USS, makes it clear that USS prefers trustees that toe the line and don’t ask difficult questions, which means trustees that aren’t fully doing their jobs. Professor Hutton gave a teach-out on pensions, valuations and USS at Newcastle UCU this week – you can watch the video of that here (part 1) and here (part 2), and access the slides here

Whilst there has been some movement on the Four Fights campaign, there has been no movement on the USS dispute. Regularly scheduled meetings are taking place, but they are part of the ongoing tripartite talks, not negotiations for settling this dispute. Sam Marsh, one of our national negotiators, summed up the latest meeting by saying that the mood in the room was tense, and he got the impression that the flexibility that USS was demonstrating early in this process has gone away. They expect a discussion paper on the latest valuation methodology (including Test 1) from USS soon, and then it will be largely down to UCU and UUK to, well, discuss. If UCU and UUK team up together, they can end this dispute. So far, though, UUK has been hiding behind a supposed mandate from their members. Their members need to force UUK leadership to change their minds.

Because of this, it’s even more important that we gather in strength and noise. If you can get to the pickets, please join. If you can’t, please make noise on Twitter using the hashtags #UCUStrike #UCUStrikesBack or #USSstrike

On ASOS, we have been assured by the Head of HR that there is no threat in the communications about ASOS deductions. We could not secure a guarantee that no ASOS deductions would happen, but we were assured more than once that the communications do not contain a threat. We raised concerns about asking staff to reschedule teaching, not only because of logistics but also because the pay for that activity has already been lost, so it would be asking members to pick up extra work for free. It was suggested that perhaps members with research allocation could forego research in order to make-up teaching so as to avoid creating even more unsustainable workloads. We made it clear that this would not be acceptable. We hope to continue this conversation with the VC and Head of HR in our next meeting so that we can come to a mutual agreement on this that will not disadvantage our members, but will also serve to continue to support our students. Our advice stands – do not reschedule teaching, and do not fill in the ASOS form.

On the latest UUK consultation, Keele’s response was with the majority in not offering a new deal to UCU. However, we have been told that Keele’s response also sent a strong message. We have asked if this response could be shared publicly, and look forward to getting a reply on this from the VC.

Remember that ASOS starts as soon as we get back to work on Thursday. ASOS is working to contract – work reasonable hours (most contracts say around 35-37.5 hours per week), do not take on any voluntary activities or any activities outside of your normal contractual obligations, do not cover for missed work or absent colleagues. More advice on ASOS can be found here and  here (specific advice for academic related and professional colleagues).

SCR Opening in Support of Strike

In support of the strike, the SCR will be opening on Wednesdays as well as Fridays throughout the strike period (starting this week!). They will be open 17:30-19:30 this Wednesday. Please do pop along for a chat and a drink if you can! I know that many of the strike committee will be there, so although not a formal KUCU social, it will be a chance to catch up & to relax a bit before we’re back to work on Thursday.

See you on the pickets, everyone!